May 04, 2011
So we finally have an update of our weather data, following from the hard work of an NCSU graduate student, Jon Eyer.

Here's a preview of what that data shows (click for a larger version): 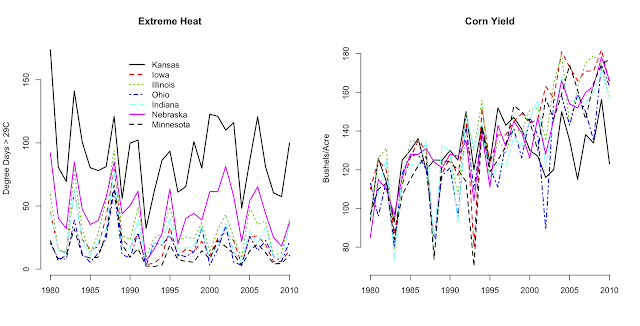 The left panel shows degree days above 29C, measured continuously over time and space and averaged over growing areas.  The right panel shows corn yields, in bushels per acre.  The inverse relationship between extreme heat and yields is fairly clear.  The one big exception is 1993 when a flood damaged yields severely even though it wasn't very hot.

First, 2010 was hot, but not nearly as hot as it has been.  Given how bad things were relative to expectations, I was expecting a much higher extreme heat measure.  Our basic regression model pretty much hit the 2010 yield on the nose, so markets (and the USDA) shouldn't have been surprised conditional on the heat.

Second, projections under most climate change scenarios are a lot worse in the coming years.  Overall, weather has been strangely good in the U.S. in recent years.  If it stays as cool as 2010, we'll be lucky.

Third, last summer I inadvertently provoked a sharp response from Ted Crosbie of Monsanto by suggesting corn tolerance to extreme heat has been declining over the last few decades.  Despite Dr. Crosbie's feelings on the issue, I think there is some tell-tale evidence of just this phenomenon in the graph.  Kansas, which is significantly hotter than the other big corn states, had yields similar to the other states 30 years ago.  But today Kansas yields there are much lower.  I think this is interesting because in earlier work we identified the phenomenon of declining heat tolerance by looking exclusively within states, not at differential trends across states. Also, this pattern doesn't require fancy non-parametric statistics--it's easy to see with the naked eye.