January 17, 2010
The tragic earthquake in Haiti has had me wondering about U.S. Sugar policy.  I should warn readers in advance that both Haiti and sugar policy are topics I know little about.  All I really know about Haiti is that it shares a history with many similarities to other struggling Caribbean islands, with roots in colonial sugar plantations, rum and slavery, only much, much worse.  And my knowledge of U.S. Sugar policy is somewhat superficial.

So, here's the basics of U.S. sugar policy.  Like other agricultural policies, U.S. sugar policy got its start in 1934 during the Great Depression.  With prices of agricultural commodities (and everything else) plummeting, the government wanted to support prices in an effort to support farmers' incomes.  After all, back then, a lot more of us were farmers, and unlike today, most farmers were poor.  A lot of what the government did back then, even if it had good intentions, probably did more harm than good.  People were hungry too, and one thing they did was destroy crops and limit agricultural production in an effort to support prices, which didn't help people to eat.  But these policies probably did help to support farm incomes.  And to some extent they still do.

But an important thing to realize is that sugar was different.  It was (and is) different from the other commodities because the U.S. imports a lot of it.  Thus, to support prices, the government did not need to limit domestic production as much as it needed to limit imports.  So, ever since the 1930s, the U.S. has supported a minimum price for sugar by placing a quota on the amount of sugar imports.  (Two short-lived exceptions were in the early 70s and early 80s, when world prices spiked and the quota was lifted.) Restricting imports has kept domestic sugar prices higher and less variable than world prices, which has created considerable rents to the favored exporting nations with large quotas.

The price supports led to much greater domestic sugar production than there would have been otherwise, a lot of it around the Everglades in Florida, with some significant environmental problems as a consequence.  The quotas and price supports also spurred the development of corn syrup which could be made from domestically produced corn. 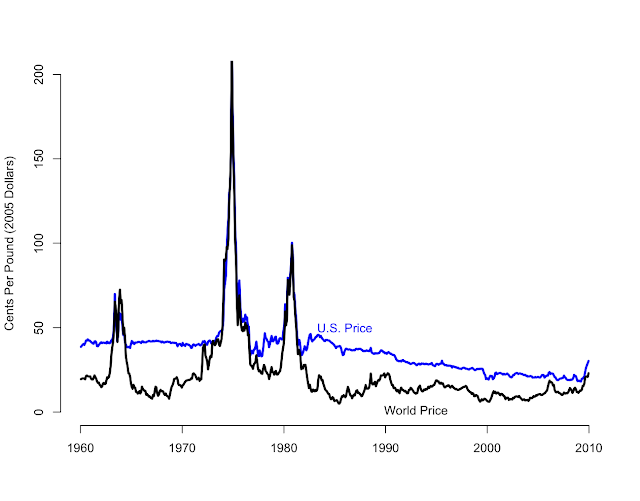 Europe has also supported sugar prices by limiting imports.  In fact, the support prices in Europe have been similar or greater than those in the U.S.  Many of the Caribbean islands have been beneficiaries of this quota-generated largess, with other less or unfavored nations left to market their sugarcane at world prices, which could be as little as one-third U.S. and European prices.

But beginning in 2005, Europe began winding down its sugar import restrictions.  This has caused production to decline in Europe and those Caribbean nations that had favored export status to Europe at their elevated prices.   It has also caused world sugar prices to rise.  While U.S. sugar policy is alive and well it is under increasing pressure, in part due to rising sugar prices, pressure from food producers, but probably also due to trade liberalization in Europe.

The Dominican Republic also possesses the largest share of U.S. sugar quota, equal to well over 20 times that of Haiti's. (See here)

And so I wonder: How much of the Dominican Republic's success relative to that of Haiti has to do with the fact that it received a much larger share of the U.S. sugar quota?

There's probably not a clear answer to this question.  But it stands to reason that U.S. policy has at least something do with Haiti's larger challenges, which have, in turn, made them so vulnerable to natural disasters.

Update: Here is some background reading on sugar policy