Showing posts from April, 2009
Show all

April 30, 2009
Paul Krugman has a nice column on climate economics. And here he's picking on Robert Samuelson, a columnist at the Washington Post. I've always found Samuelson's economics a little askew from the economics I know and teach. So I sympathize with Krugman here. In my own circles I hear that climate scientists sounding the alarm about global warming are simply pursuing larger federally-funded research budgets. I wonder if these people have thought carefully about the coordination problems involved with such a strategy, and compared it to, say, coordination by OPEC countries (which appears largely ineffective at controlling prices[ 1 ][ 2 ]). In my own experience, I find scientists and academics pretty shrewd and independent minded, a particularly tough group to coordinate. And besides, if they were just looking for more research dollars wouldn't they be emphasizing uncertainty and ambiguity over action? Maybe all the scientists are mistaken. But if conspiracy the
4 comments
Read more 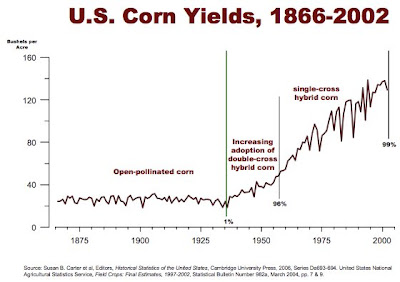 Awhile back I promised I would try to summarize some of my own other others’ research on the effects of agricultural subsides. Well, it’s taken me a bit longer than anticipated… And, well, I just cannot summarize all of this stuff in one post. Instead, for starters, I am going to summarize some of the stylized facts that are most prominent in my own mind when I think about U.S. Agriculture, agricultural subsidies and their consequences. 1) The dawn of the “green revolution,” which started crop yields on a remarkable and historically unprecedented upward trend that continues today, began around the same time agricultural subsidies began on a large scale. To add irony to irony, this trend began during the middle of the Great Depression. I do not believe there is a causal link going from subsidies to subsequent yield growth. Rather, it seems that during the dust bowl farmers realized that hybrid corn was less susceptible to drought than traditional corn varieties. And this di
8 comments
Read more

Which came first, the research question or the natural experiment?

April 24, 2009
A few years back Moretti and Dahl had a working paper about the “ Demand for Sons .” The essential fact was that parents of daughters are more likely to divorce than parents of sons. The paper was recently published in the Review of Economics and Statistics. The working paper got a lot of press and got a lot of people excited. See Steven Landsburg’s old columns at Slate , for example. One reason folks got so excited was that Landsburg’s title was a bit more provocative: “Oh No! It's a Girl. Why do Daughters Cause Divorce?” What a crazy idea, yes? Where did the authors come up with it? Neither Dahl nor Moretti have spent much of their lives studying marriage, divorce, or family dynamics, or at least that is what one would gather by looking at their other publications. Almost surely they came up with this idea after recognizing, or seeing someone else recognize, that the gender of the child is essentially (or at least seemingly) random. Dahl and Moretti (I’m guessing) reason
Post a Comment
Read more

The cost of CAFE standards: Not as high as we thought?

April 17, 2009
Yesterday's TREE Seminar featured Jim Sallee of the University of Chicago. Sallee presented an interesting paper that uses a clever yet simple method to estimate the cost to car companies of meeting CAFE standards. Here's the abstract: Automakers can comply with fuel economy regulations by exploiting a loophole that gives a bonus to flexible-fuel vehicles. Under certain conditions, firms will equate the marginal cost of using the loophole, which is observable, with the unobservable costs of other compliance strategies, such as selling smaller cars or upgrading technology. After verifying that these conditions hold empirically, we estimate that tightening standards by one mile per gallon would cost automakers $8–$18 in lost profit per vehicle. Our estimates are considerably lower than other recent estimates based on structural identification. Our approach may help reveal compliance costs for other regulations. So car companies can achieve CAFE standards by either making thei
3 comments
Read more

April 14, 2009
It seems like every time I present this paper , or discuss it with folks, someone says "well, what about biotechnology--won't they be able to engineer crops that do better in warmer climates?" My answer is, I don't know. We can't predict the future. But we do know they haven't been able to produce more heat tolerant plants in the past, and they have been growing corn and soybeans in climates that are warmer than optimal, and in some cases much warmer than optimal, for a very long time. So the incentive to breed or engineer more heat tolerant plants has been around for a long time. Of course, that incentive could be much greater in the future. Yes, Monsanto has been making great claims about new heat/drought tolerant corn. But I haven't seen any evidence yet. Zilch. It's not because I haven't been looking. And then there are reports like this one : Despite industry claims of higher yields from biotech corn and soybeans, much of the increase
Post a Comment
Read more

April 06, 2009
For an "Environment and Society Class" a student from UNC Chapel Hill interviews me, via email, on potential impacts climate change on food security. Here are her questions (in italic ) and my answers: What do you think the biggest climate change-induced threat to agriculture is for the future of food security? This is a good question and one I think about a lot. Climate change poses many potential threats to food security. Many and perhaps most of these threats may well be resolved in one way or another, but it’s hard to tell. At this point in time, I have a hard time ranking the threats. But here are the ones I think about most: Agronomically, the regions likely to be hardest hit from climate changes are countries in the tropic and sub-tropic regions of the world. These regions are also where most very poor countries reside. This is bad news and poses a big potential threat. It is very important to remember that we live in a global world and food prices are connec
1 comment
Read more

April 02, 2009
Jim Hamilton at econbrowser explains large recent fluctuations in oil prices. Amid all the crazy explanations for the wild ride in oil and other commodity prices, I think Hamilton nails this one: World real GDP increased by 9.4% between 2003 and 2005. That growth in world income was the primary cause behind an increase in world petroleum consumption of 5 million barrels per day between 2003 and 2005, a 6% increase over the two years. The next two years (2006 and 2007) saw even faster economic growth (10.1% cumulative two-year growth), with Chinese oil consumption alone increasing 870,000 barrels per day. Yet between 2005 and 2007, global oil production stagnated. What persuaded residents outside of China to reduce petroleum consumption in the face of booming levels of income? The answer is that the price of oil had to increase. How much the price should have risen depends on the price elasticity of demand. Consider the following illustrative calculations. It seems reasonable to m
Post a Comment
Read more

April 02, 2009
Today I saw Chris Dumas, an old friend from grad school who helped me paint the (sorely-missed) Toyota pickup I had in my Berkeley days. I also had the pleasure of meeting John Whitehead of the famed env-econ blog . As far as business was concerned: I learned that the way to think about a comprehensive analysis of the potential economic impacts to North Carolina from sea-level rise is to: (1) pretend climate doesn't change at the same time sea-levels rise, even though climate change causes sea-levels to rise; (2) pretend North Carolina is the only place in the world that will be affected by sea-level rise; and (3) pretend prices for everything will stay the same. I also learned that the first thing that comes to mind to North Carolina agriculture folks when thinking about problems associated with a 4 ft. sea-level rise is encroachment of residential development on agricultural lands. That is all.
1 comment
Read more

Andrew Gelman tells us how NOT to do data analysis

April 02, 2009
An April fool's joke? Yes. A well-deserved broad swipe at economists? Yes. It's also very funny, if you read Gelman regularly and have a peculiar sense of humor. At least I appreciated it. I liked Mankiw's less subtle joke too.
Post a Comment
Read more
More posts