The other day Marshall and Sol took on Bjorn Lomborg for ignoring the benefits of curbing greenhouse gas emissions.  Indeed.  But Bjorn, among others, is also notorious for exaggerating costs.  That fact is that most serious estimates of reducing emissions are fairly low, and there is good reason to believe cost estimates are too high for the simple fact that analysts cannot measure or imagine all ways we might curb emissions.  Anything analysts cannot model translates into cost exaggeration. Hawai`i is a good case in point.  Since moving to Hawai`i I've started digging into energy, in large part because the situation in Hawai`i is so interesting.  Here we make electricity mainly from oil, which is super expensive.  We are also rich in sun and wind.  Add these facts to Federal and state subsidies and it spells a remarkable energy revolution.  Actually, renewables are now cost effective even without subsidies. In the video below Matthias Fripp, who I'm lucky to be working w
Post a Comment
Read more

Paul Krugman doesn't typically write about food, so I was a little surprised to see this.  Still, I think he got most things right, at least by my way of thinking.  Among the interesting things he discussed. 1. The importance of behavioral economics in healthy food choices 2. That it's hard to know how many actual farmers are out there, but it's a very  small number . 3. That we could clean up farming a lot by  pricing externalitie s [also  see ], or out-right banning of the most heinous practices, but that doesn't mean we're going to go back to the small farms of the pre-industrial era, or anything close to it. 4. Food labels probably don't do all that we might like them to do (see point 1.) 5. How food issues seem to align with Red/Blue politics just a little too much There's enough to offend and ingratiate most everyones preconceived ideas in some small way, but mostly on the mark, I think.
Post a Comment
Read more 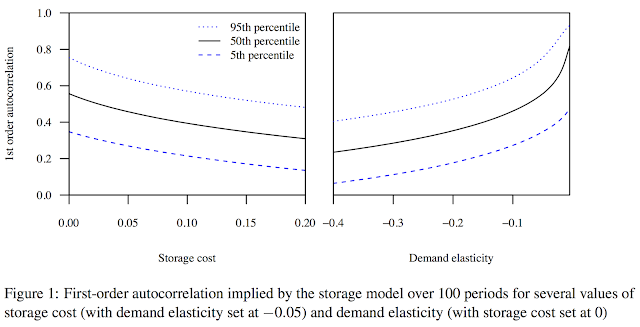 Angus Deaton just won the Nobel Prize in economics.  He's a brilliant, famous economist who is known for many contributions .  In graduate school I discovered a bunch of his papers and studied them carefully. He is a clear and meticulous writer which made it easy for me to learn a lot of technical machinery, like stochastic dynamic programming.  His care and creativity in statistical matters, and linking data to theory, was especially inspiring. His papers with Christina Paxson inspired me to think long and hard about all the different ways economists might exploit weather as an instrument for identifying important economic phenomena. One important set of contributions about which I've seen little mention concerns a body of work on commodity prices that he did in collaboration with Guy Laroque.  This is really important research, and I think that many of those who do agricultural economics and climate change might have missed some of its implications, if they are aware of it
Post a Comment
Read more

August 04, 2015
Matt has taken the bait and asked me a five good questions about my snarky, contrarian post on climate adaptation.    Here are his questions and my answers. Question 1.    This paper will be published soon by the JPE. Costinot, Arnaud, Dave Donaldson, and Cory B. Smith. Evolving comparative advantage and the impact of climate change in agricultural markets: Evidence from 1.7 million fields around the world. No. w20079. National Bureau of Economic Research, 2014.    http://www10.iadb.org/intal/intalcdi/PE/2014/14183.pdf It strongly suggests that adaptation will play a key role protecting us. Which parts of their argument do you reject and why? Answer:    This looks like a solid paper, much more serious than the average paper I get to review, and I have not yet studied it.    I’m slow, so it would take me awhile to unpack all the details and study the data and model.    Although, from a quick look, I think there are a couple points I can make right now.    First, and mo
Post a Comment
Read more

Why Science for Climate Adaptation is Difficult 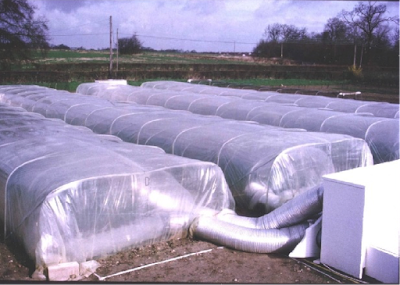 Matthew Kahn, author of the cheeky book  Climatopolis: How Our Cities will Thrive in the Hotter Future ,  likes to compliment our research ( Schlenker and Roberts, 2009 ) on potential climate impacts to agriculture by saying it will cause valuable innovation that will prevent its dismal predictions from ever occurring.  Matt has a point, one that has been made many times in other contexts by economists with Chicago School roots.    Although in Matt’s case (and most all of the others), it feels more like a  third stage of denial  than a serious academic argument. It’s not just Matt.    Today, the serious climate economist (or  Serious ?) is supposed to write about adaptation.    It feels taboo to suggest that adaptation is difficult.    Yet, the conventional wisdom here is almost surely wrong.    Everyone seems to ignore or miscomprehend basic microeconomic theory: adaptation is a  second or higher-order effect , probably as ignorable as it is unpredictable.  While the the
Post a Comment
Read more

Ben Bernanke, recent former Chair of the Federal Reserve, has a new blog .  And he's writing about low interest rates and so-called secular stagnation, a pre-WWII phrase recently resurrected by Larry Summers . The topic is dismal--hey, they're economists! But for those in the field it's a real hoot to see these titans of economic thought relieved of their official government duties and able to write openly about what they really think. These two share many views, but Ben has a less dismal outlook than Larry.  Larry thinks we're stuck in a low-growth equilibrium, and low or even negative interest rates are here to stay without large, persistent fiscal stimulus.  Ben thinks this situation is temporary, if long lived.  He writes: I generally agree with the  recent critique of secular stagnation by Jim Hamilton, Ethan Harris, Jan Hatzius, and Kenneth West . In particular, they take issue with Larry’s claim that we have never seen full employment during the past sev
10 comments
Read more

The Limits of Econometrics, and Roots of Modern Applied Micro

March 16, 2015
I just stumbled upon this article by David Freedman, published post-mortem.  A lot of this looks familiar to me: you can find pieces of it in David Freedman's book, Statistical Models, Theory and Practice , which I highly recommend. Perhaps I've blogged about this before, but I rather suspect that David Freedman's critical writings on use and misuse of regression analysis formed the basis of so-called "applied micro," which grew out of Princeton University, and the work of Ashenfelter, Card, Krueger, Angrist and others.  An occasional citation will clue careful readers to this connection, particularly the teaching of natural experiments, and David Freedman's canonical example:   Snow on Cholera .  Some modern references to Snow refer to Freedman; many do not.  But I'm pretty sure it was in fact Freedman who  dug this seminal work out of the dustbin of history and used it to inspire invigorated new empiricism that searches for natural experiments and ri
Post a Comment
Read more

Erica Goode has an inspiring article about the benefits of conservation tillage, which has been gaining favor among farmers.  No-till farming can improve yields, lower costs, and improve the environment.  Just the kind of thing we all want to hear--everybody wins! One important thing Goode doesn't mention: USDA has been subsidizing conservation tillage, and these subsidies have probably played an important role in spreading adoption. Subsidizing conservation practices like no-till can be a little tricky.  After all, while this kind of thing has positive externalities, farmers presumably reap rewards too.  There are costs involved with undertaking something new. But once the practice is adopted and proven, there would seem to be little need for further subsidies.  The problem is that it can be difficult to take subsidies away once they've been established. In practice, the costs and benefits of no till and other conservation practices vary.  Some of this has to do with
Post a Comment
Read more
More posts