Showing posts from August, 2009
Show all

It's been a long haul, but my coauthor Wolfram Schlenker and I have finally published our article with the title of this blog post in the Proceedings of the National Academy of Sciences . We've been told that it would show up on the early-edition website this week. It hasn't shown up there yet so I guess it will come out tomorrow [Friday 8/28], probably late afternoon EST. UPDATE: You can find the article here . We set out to develop a better statistical model linking weather and U.S. crop yields for corn, soybeans and cotton, the largest three crops in the U.S. in production value. Our major new finding is that (by far) the best predictor of yield is a measure of extreme heat: how much temperatures exceed about 29C (84F) during the growing season. The threshold varies somewhat by crop--29C is the threshold for corn. Below this threshold, warmer temperatures are more beneficial for yields, but the damaging effects of temperatures much above 29C are staggeringly large.
6 comments
Read more 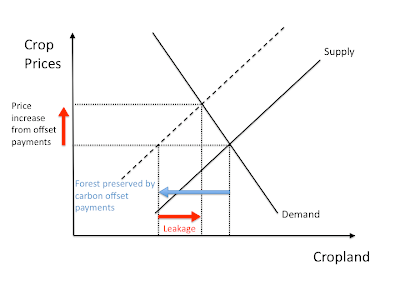 As I've described in some of my earlier posts [ 1 , 2 , 3 ], there is a big problem with CO2 cap-and-trade policy that counts carbon from fossil fuels but does not count carbon from forestry and agriculture. The problem is fossil fuels will be replaced by other energy sources, like biofuels, that can affect the carbon balance in powerful and sometimes indirect ways. For example, biofuel consumption will be derived from land. This ultimately puts pressure on prices of agricultural commodities. Higher commodity prices leads to more crop production and higher crop production ultimately comes from deforestation. It's hard to tell how large this problem may be. But the fact that 20 percent of carbon emissions come from deforestation suggests it could matter a lot. Right now alternative sources of carbon sequestrations and emissions are being targeted by carbon offsets. If you feel guilty about burning fossil fuels you can go to places like TerraPass.com or www.Carbonfund.
Post a Comment
Read more

On the front lines of carbon offsets

August 22, 2009
A really nice article in the New York Times about paying Brazilian farmers to not clear forests and plant soybeans. QUERENCIA, Brazil — José Marcolini, a farmer here, has a permit from the Brazilian government to raze 12,500 acres of rain forest this year to create highly profitable new soy fields.... Mr. Marcolini says he cares about the environment. But he also has a family to feed, and he is dubious that the group’s initial offer in the negotiation — $12 per acre, per year — is enough for him to accept. “For me to resist the pressure, surrounded by soybeans, I’ll have to be paid — a lot,” said Mr. Marcolini, 53, noting that cleared farmland here in the state of Mato Grosso sells for up to $1,300 an acre. ....Deforestation, a critical contributor to climate change, effectively accounts for 20 percent of the world’s carbon dioxide emissions and 70 percent of the emissions in Brazil . Halting new deforestation, experts say, is as powerful a way to combat warming as closing the worl
Post a Comment
Read more

Cash for Clunkers: A good natural experiment for measuring effects of air pollution?

August 20, 2009
Okay, I know everyone, including me, has complained about C4C not providing all that much in terms of CO2 abatement. But there must be a fair amount of other pollution benefits, like reductions in NOx, SOx, and CO, all of which have reasonably well-measured negative externalities, like infant mortality and asthma. Another benefit could be for researchers. This seems like a decent natural experiment for looking at effects of air pollution. In at least in some parts of the country this must have reduced air pollution by a measurable amount. It helps that the program was implemented so quickly and during the more-polluted summer months. It looks like all $3 billion (or more) will be spent by Monday. There have been a few air pollution natural experiments in recent years but there must be room for another. Alternatively, it shouldn't be too hard to calculate air pollution differences based on what we know about the cars clunked and bought under the program. Couple that and/or
2 comments
Read more

More on Cash for Clunkers

August 13, 2009
Max Auffhammer writes to keep me current on Cash for Clunkers. (Thanks Max!) Mathew Kahn does his own back-of-the envelope calculation. And Christopher Knittel does more than a back-of-the-envelope calculation. I think my calculations , though stated a little different, are very much in a ballpark of what these guys found. That's kind of cool because I threw those numbers together pretty quickly. Given that, I think I'll gloat a little: I beat these guys by a week!
Post a Comment
Read more

August 13, 2009
I'm in beautiful Asheville, NC listening and watching to a bunch of interesting papers, mostly given by graduate students. Here's the program . When located in places like Asheville I wish they could figure out a way to do these things outside. It was tough getting in to the boot camp this year: only 20% of proposed papers were accepted. Hopefully I'll write a little more about what I've learned a little later.
1 comment
Read more

Don't count out ethanol yet

August 06, 2009
Mark Thoma points us to a nice article concisely summarizing how " reality pricked ethanol's bubble ." I'm not a big fan of ethanol policy. But don't count out ethanol when oil is trading at $75 and corn and natural gas (which is key for fertilizer prices) remain cheap. If world demand recovers as markets are now speculating, we'll be seeing more ethanol, even without additional government mandates.
2 comments
Read more

Carbon from clunkers: A back of the envelope calculation

August 05, 2009
According to preliminary data from the Cash for Clunkers program, the average car clunked had MPG of 15.8 and these were replaced with cars with 25.4 MPG. Let's say a typical driver drives 15,000 miles/year. That amounts to nominal savings of 15000/15.8 - 15000/25.4 = 358.8 gals./year. According to the EPA , each gallon of gas burned creates 19.4 pounds of CO2. So the nominal annual savings in carbon emissions is about 3.5 tons of CO2. Approximating actual carbon savings is a lot more difficult. Among other things, we need to consider (a) how long the clunked car would have remained on the road were it not clunked; (b) the car the buyer would have bought had he/she not been enticed with subsidies into buying a higher-mileage vehicle; (c) when he/she would have bought that other car; (d) whether buying a new higher-MPG car causes the buyer to drive more. These are difficult issues and I don't have hard data to answer them. So it goes--this is a back-of-the-envelope calcu
2 comments
Read more

August 04, 2009
Funny and sad post from Paul Krugman today : Long ago I said that if liberals said the Earth was round, while conservatives said it was flat, the news headlines would read “Shape of the planet: both sides have a point.” But I encountered a new wrinkle today. I was tentatively scheduled to be on a broadcast dealing with — well, I won’t embarrass them. But first they had to find someone to take the opposite view. And it turned out that they couldn’t — which led to canceling the whole segment. In a way this goes beyond my original point, which was the unwillingness of the news media to referee a controversy by actually reporting the facts. Now it seems that a fact isn’t worth reporting unless someone is prepared to deny it. Okay, everyone likes to complain about the media and all of its biases. Journalists I know in DC take offense at this line of attack, and rightly so, because most journalists don't let personal agendas into their reporting. Unless it sells. And that's the
1 comment
Read more

Is cash for clunkers like paying farmers to plow up perfectly good crops?

August 03, 2009
Jim Hamilton over at econbrowser doesn't like cash for clunkers . He compares the policy to the Agricultural Adjustment Act of 1933, which paid farmers to slaughter livestock and plow up perfectly good crops. It does seems strange to destroy perfectly useful capital. But destroying old and polluting capital (clunkers) can be a bit different than destroying nondurable goods like crops. It's different because old cars pollute more than new cars and because this is an unusual time when a lot of excess car production capacity sits idle. If destroying a few clunkers causes idle factories and labor to be put to good use producing new less-polluting cars, then there could be a genuine social benefit. Indeed, it would seem that, as a first approximation, each clunker clunked would be replaced by a new car produced using resources that would otherwise be sitting idle. Since each new car created clearly embodies more social value than each car destroyed, it doesn't seem such a
3 comments
Read more

Why would Libertarians attack Michael Pollan?

August 02, 2009
There are things I like and things I don't like about Michael Pollan's influential book s. On balance, I think there is more to like about them than not. But I certainly don't see Michael Pollan as anti-Libertarian. In fact, I find his writing sympathetic toward Libertarian views. He advocates individuals to make better food choices. And he sees government regulation as a key problem with our food system, not a solution. Anyway, it just surprised me to see the title " Libertarians Attack Michael Pollan ." After reading the article, which is good, I wondered if its title may be a little misleading. It's not so hard to see why a hyperbolic farmer might be a little unhappy with Pollan's writings . While I'm no Libertarian, I also kind of wonder whether most would identify with today's American Enterprise Institute.
1 comment
Read more
More posts