Showing posts from September, 2012
Show all

September 27, 2012
So today they released a revised GDP growth rate for the Spring quarter that was 1.3%, down from an initial estimate of 1.7%.  The revision was blamed mainly on the heat/drought that devastated crop production in the Midwest. Now, that crop devastation was bad news for the world as a whole, but I'm not so sure it was bad for the narrow interests of the US. We're the world's largest exporter of staple food commodities, and commodity prices went up a whole lot as a result of the losses. Further, those higher crop prices will stick around at least until next year, boosting farm incomes considerably.  So, ironically, the U.S. is probably better off as a result of a bad harvest. Real GDP doesn't reflect the price benefit of exports because real GDP holds prices fixed at a baseline level, so it just measures the physical losses of the crop. This is quite unusual, I think, for a downward revision of this magnitude to actually be a good thing.  But let me emphasize again:
Post a Comment
Read more

September 25, 2012
I had to save this link in an easy-to-find place, so here it is: EconTrolls: An Illustrated Bestiary
Post a Comment
Read more

Is what's good for you also good for the planet?

September 24, 2012
In an OpEd today, Dean Ornish reviews some of the science about eating healthy .  Ornish is famous for curing heart disease through diet and lifestyle change rather than with drugs or bypass surgery.  He's also famous for challenging the Atkins diet, which may help some people lose weight, but is still unhealthy. Anyhow, one sentence in his OpEd struck me because I think it's what many people presume be true, but I'm not sure whether it really is.  Here it is, in context: WHAT you eat is as important as what you exclude — your diet needs to be high in healthful carbs like fruits, vegetables, whole grains, legumes, soy products in natural, unrefined forms and some fish, like salmon. There are hundreds of thousands of health-enhancing substances in these foods. And what’s good for you is good for the planet . [my emphasis] I'm sure Ornish is right about what's really healthy.  But is it true that what's good for you is good for the environment?
5 comments
Read more

September 21, 2012
The other day I commented about the importance and ambiguity of discount rates when estimating the social cost of CO2 emissions. One key issue that it seems resource/environmental economists have largely ignored is the link between inequality and discount rates. First, some more background.  To focus cleanly on tradeoffs over time, nearly all the work in this area uses a representative-agent model that imagines society as a mythical aggregated individual deciding how much to consume today versus tomorrow. Within these models, equilibrium interest rates (i.e., discount rates) are intimately tied to consumption growth, which we imagine to be roughly equal to growth in GDP per capita.  Since historically that growth has been steady, leaders in environmental economics, including luminaries like William Nordhaus and Robert Pindyck, prefer the use of higher discount rates because they presume our ancestors descendents will be so much richer than we are.  Even Weitzman, who prefers very
3 comments
Read more

September 19, 2012
So Japan, seeing the boom in US stocks and the decline in the dollar with Ben Bernanke's QE3, decides to do the sam e.  After all, Japan has been struggling with a near deflationary economy for two decades, and what the Fed just did was what economists have been saying Japan should do for a long time. Now, with the dollar and yen falling relative to the euro, it's going to put more pressure on the European Central Bank.  If ECB doesn't loosen as well, the strength of the euro will hamper their exports, and putting headwinds on their already stagnating economy. And so I expect it may go.  Now that the U.S. is pushing harder on monetary policy, I think others will too, all the more if it seems to be working. Inflation here we come.  I don't mean hyperinflation; I mean an extra point or two or three more inflation not this year or perhaps even next year, but in two or three years.  And this may be enough to get consumption and investment going again in the nearer ter
Post a Comment
Read more

Discount rates and the social cost of carbon 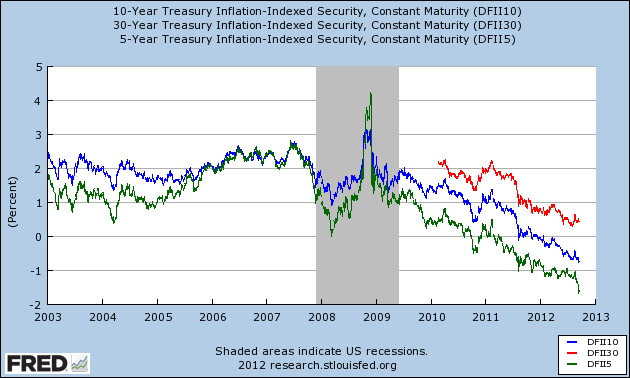 Joanna Foster at the New York Times Green Blog discusses how discount rates affect estimates of the social cost of carbon ---the "price" we all would have to pay for emissions to bring them down to an efficient level.  A new study suggests we should use a lower discount rate, which indicates much higher carbon prices.  Michael Greenstone, who led a study by the President's CEA, seemed to think the rate his study used was just fine. A little background:  There are many assumptions that go into estimating the social cost of carbon.  We need to think about impacts of climate change on sea level rise, agriculture, coral reefs, fisheries, recreation, human health and on and on, each of which is controversial in its own right.  But the biggest overarching assumption is, by far, the choice of discount rate, which coverts projected future benefits and costs into today's dollars. The starting point for thinking about discount rates is to look at real interest rates, which
3 comments
Read more

September 16, 2012
Tyler Cowen writes about lagging productivity growth in agriculture, headwinds due to the organic/locavore movement, high fertilizer prices and poor infrastructure in Africa, the destructiveness of trade restrictions, the problems with ethanol policy and why we need to give more respect to agricultural economists.   Thanks, Tyler ;-) Especially if you're in the DC area, be sure to check out Cowen's ethnic dining guide .
Post a Comment
Read more

September 16, 2012
Here 's David Lobell at the Chicago Council on Global Affairs: For all of the talk about the need to adapt to climate change, we still know fairly little about two basic questions: what works best, and how much can adaptation deliver? .... Why don’t we know more? It would be easy to blame our ignorance on complacency. There is a tendency to marvel at the progress made in agriculture in the past 50 years, and assume it can handle anything.... It is also tempting to blame ignorance on inexperience. After all, many people continue to view climate change as something to deal with in the future. But the evidence is clear that climate has already been changing over the past 30 years in most agricultural areas, and farmers are doubtlessly trying to adapt. Up until now, the United States was an exception to that trend. But the 2012 drought has changed that, and projections indicate that years like this will be increasingly common in the coming decades. ....
Post a Comment
Read more 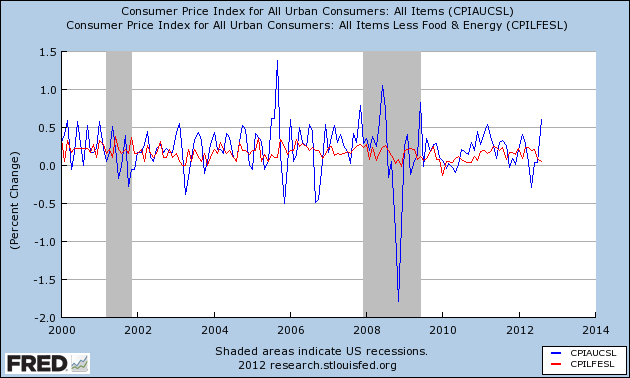 Stephan Karlson cherry picks August's measure of inflation and writes the Fed stated that money supply rose 0.3% the latest week alone, causing the annualized 3 month gain to increase to 8.6% and the yearly gain to increase to 7%. And then the U.S. consumer price index rose 0.6% (annualized 7.4%) in August. He didn't put the month's inflation numbers in longer-run context, or relative to other measures like the "core" inflation which removes food and energy.  He nevertheless concludes So, it is clear that unless the European debt crisis again worsens and again causes a surge in demand for dollar  assets, there will be a big increase in price inflation soon. So, here is a graph that does put August's inflation numbers in context. Blue is monthly percent change in the CPI and red is the monthly percent change "core" CPI, which removes food and energy (which are more volatile). The two obvious points: (1) the monthly CPI is crazy variab
Post a Comment
Read more

The Fed Pulls the Trigger

September 13, 2012
Wow.  I didn't think the Fed would do this .  But they did: “A highly accommodative stance of monetary policy will remain appropriate for a considerable time after the economic recovery strengthens," And I'm glad they did it.  It's not inflation targeting or nominal GDP targeting, but it's more-or-less a commitment to be irresponsible .  (I personally don't like that characterization, because I think this is the responsible thing for the Fed to do.) Anyway, they are testing a big idea here.  We'll see if it works.
Post a Comment
Read more 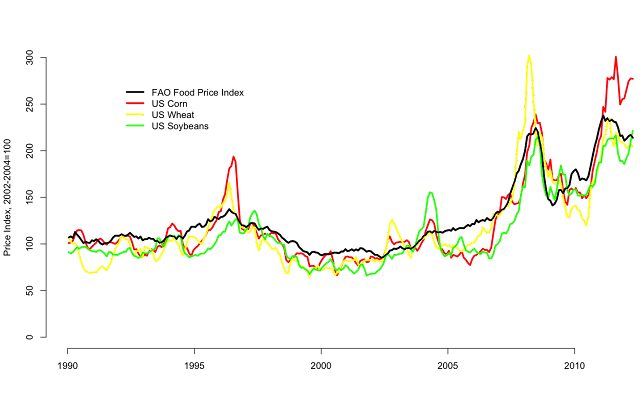 In today's NYT, we have a report about a weak monsoon and crop devastation in India: "Drought has devastated crops around the world this year, including corn and soybeans in the United States, wheat in Russia and Australia and soybeans in Brazil and Argentina. This has contributed to a 6 percent rise in global food prices from June to July, according to United Nations data" Corn is up about 60 percent since June, wheat and soybeans are up respectively about 25 and 16 percent.  The production weighted average of these three crops usually tracks the FAO index pretty well.  Here's a plot of US prices for these three key staples and FAO's food price index. (I made this graph a little while ago, so it doesn't include last month's spike.) So why is FAO food price index up just 6% (the implicit reference in the NYT article) given the much larger spikes in corn, soybeans and wheat? Rice prices--another key staple--remains subdued due to large
4 comments
Read more

Does the Fed really have a commitment problem?

September 01, 2012
This is a followup to my last post : Here is a more nuanced explanation of Krugman's views on monetary stimulus at the zero lower bound, which I think I had already understood and mostly agree with.  I differ from Krugman (with admittedly little authority) in thinking that it shouldn't be hard for the Fed to make a credible commitment to future easing if they wanted to.  If Bernanke said the word, and explained precisely how he would do it, I believe markets would respond immediately, and the broader economy wouldn't be far behind.  Continued market movements in response to Bernanke's leanings are a hint of that influence. Yes, it's true, if Bernanke did it Congress would howl in protest and haul him up to Capital Hill and berate him for debasing the currency, etc.  So?  They're doing that anyway. And if Romney wins Bernanke will lose his job and his influence anyway, despite being a Republican. A long time ago (almost 2 years!) I explained my r
Post a Comment
Read more
More posts