Another few plots on extreme heat and corn yields

May 14, 2011
This is similar to something I put up the other day, except with just three states: Iowa, Missouri and Minnesota.  That makes it a little easier to see.

Also, David Lobell suggested my remarks about Kansas may be a little off since Kansas is so heavily irrigated.  It might be better to draw comparisons between non-irrigated states with different temperature profiles.

So these three states are about the same latitude.  Iowa is the nations sweet spot--the best soils and the best climate.  Minnesota tends to be a bit cooler than ideal; Missouri is too hot.

I've also added a scatter plot to show the strong association between extreme heat and yield.  The outliers in the bottom left of the scatter (cool years with low yields) are from the Great Flood of 1993. I've added regression lines that fit the relationship separately for each state, one for 1980-1995 and one for 1996-2010.  While Iowa seems to show more heat tolerance in the more recent period, Missouri looks less heat tolerant in the more recent period.  But since Iowa really hasn't experienced any extreme heat since 1996, that flat curve is probably spurious.  Also, keep in mind there are no other variables here, and just a little bit of extreme heat probably means lots of beneficial, less-than-extreme heat. 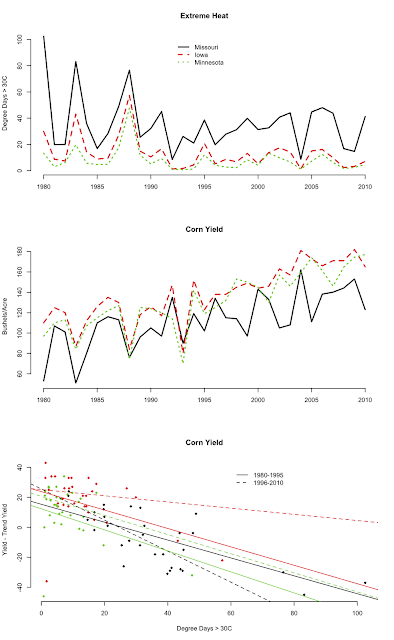 When I have a little more time I'll try dig into this stuff a little more.  But so far we've found no evidence that crop varieties grown in warmer climates are more heat tolerant than those in cooler climates, and if anything heat tolerance is declining.