Boy, that was fast.

Less than three weeks after PNAS published Wolfram Schlenker’s and my paper predicting big negative impacts from global warming on U.S. corn, soybean and cotton yields, we were notified about a letter to the editor commenting on our article.  The PNAS editors had already agreed to publish the letter when they told us about it.  We had seven days to write a maximum 500-word reply.

The jist their letter: It’s already hotter in Brazil than the United States, and some areas of Brazil have higher yields than the United States, so we were being too “pessimistic” about what might happen to U.S. yields.  More precisely, they claimed 2008 soybean yields in the Brazilian state of Mato Grasso were higher than U.S. yields of that year.

Hmmmm.  Well, we didn’t claim our results extended to Brazil.  Brazil differs from the U.S. in many ways.  For one, Brazil is a lot closer to the equator, which makes sunlight exposure markedly different.   Both countries are also quite large.  The U.S., like Brazil, has widely varying temperatures and crop yields. So, to our way of thinking, such a comparison really deserves more careful thought and analysis than a drive-by letter to the editor.

We didn’t understand the statistics given by the commenters, so we did a little digging of our own.  Mind you, we didn’t have time for a full-blown study.  But here’s what we found:

First, they cherry picked the state and the year from Brazil.  Mato Grasso is the highest yielding state in Brazil and 2008 was a remarkably good year for them, due to unusually good weather.  Other states in Brazil have average yields that are about half those of Mato Grasso.

Third, if we narrow our comparison by looking a particular state—Illinois, the number two yielding soybean state in the U.S.—and also look more closely at the data, Mato Grasso doesn’t look much warmer.  In fact, the southern half of Illinois, which has average yields comparable to those in Mato Grasso, also has comparable exposure to extreme heat.  (Northern Illinois is cooler and higher yielding than both Mato Grasso and Illinois).  This can be seen from careful inspection of the maps below (click the figure for more detail).  It turns out that there aren’t any soybeans grown in the hottest part of Mato Grasso.  It’s not clear whether the commenters took into account the locations in Mato Grasso where soybeans are actually grown.

Anyway, we couldn’t include figures or appendices in our 500 word reply to the comment, so we posted a short article on SSRN with more detail (see here).  The actual comment and reply should show up at PNAS soon. 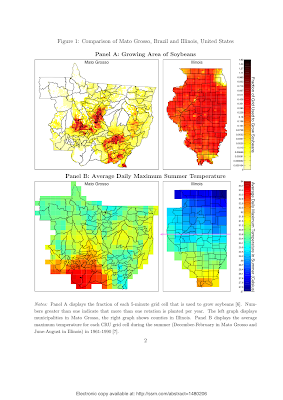