October 30, 2009
Okay, I'm not a macroeconomist, so someone please tell me if I way off base here.  I'm trying to figure out how reasonable or unreasonable the Obama administration's claim of 1 million jobs saved may be.

The media reports are useless.  We all know that every journalist can find a Republican that says it's all bogus and the Obama administration will stand by its numbers.  Sadly, none of the news reports walk through the Econ 1 and basic algebra to weigh in on the reasoning underlying the numbers.  Bad reporting or stupid reporters?  Which is it? 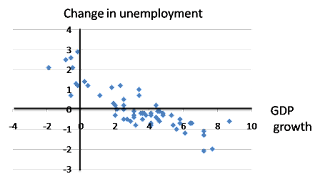 So, in claiming 1 million jobs created or saved, the Obama administration is claiming GDP is about 1.33% larger than it would have been without the stimulus.

Now we have this table from the Economic Policy Institute that, in the first three quarters of 2009, found growth was about 0.3, 2.4, and 2.3 percentage points greater due to stimulus.  These are quarterly rates, so we have to divide the sum by 4, which gives us an economy that is about 1.25% greater than it would have been.  Now, we're a little ways into the four quarter, so maybe it's okay to fudge things upward by another 2.3/12 or so, to put this up to about 1.45. 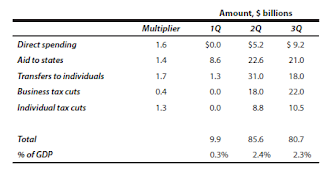 Maybe not.  You decide.  In any case, we're looking at something a little less to a bit more than a million jobs by standard macro calculations.  And this does look like a standard macro Keynesian boost.

While this sort of thing is generally difficult to pin down, to me a million jobs looks reasonable.  If there's fudging going on, someone please tell me where and how.

Update:  Brad Delong explains how to count the costs and benefits.  I imagine some would quibble around the edges with his specific numbers.  But he has all the right pieces and the numbers can't be far from correct.  Also, I think he's assuming a multiplier of 1 when something on the order of 1.5 is probably easy to justify.