December 30, 2011
At the ASSA meetings next month I'm going to present some new research wherein we (Wolfram Schlenker, Jon Eyer and myself), incorporate vapor pressure deficit (VPD) into earlier regressions linking crop yields to weather.  Vapor pressure deficit, a close cousin to relative humidity, has a linear relationship with evaporation, and is a key input in many crop models.  For this meeting we're only presenting evidence on Illinois, which has been our testing ground for fine-scale data development.

If you haven't been following, I've written a lot about the strong and robust association between extreme heat and crop yields. This puzzles some crop scientists who focus on soil moisture and precipitation as the key impediments to higher yields.  But in comparison to any precipitation or soil moisture variable we've constructed, extreme heat, measured as degree days above 29C, is a far better predictor of yield.  And the underlying relationship is similar across widely varying climates and whether identified over the cross section (comparing average yields with average climates over locations) or the time series (comparing yields over time in a fixed location with different weather outcomes).  Such a robust and pervasive pattern in observational data is extremely rare.

Most of the hard work is in constructing fine-scale measures VPD and degree day measures, including our measure of extreme heat.  Since these measures are nonlinear in temperature, accurate measurement requires daily measures of minimums and maximums on a fine geographic scale that is matched with the locations where crops are grown. This involves tedious cleaning of weather station data and a combination of statistical techniques and a climate model to interpolate weather outcomes between weather stations. Once we estimate VDP, precipitation and temperature measures on a fine scale, we then aggregate, weighting each fine-scale grid by the crop area.  State-level plots over time are shown below (click for a larger view). 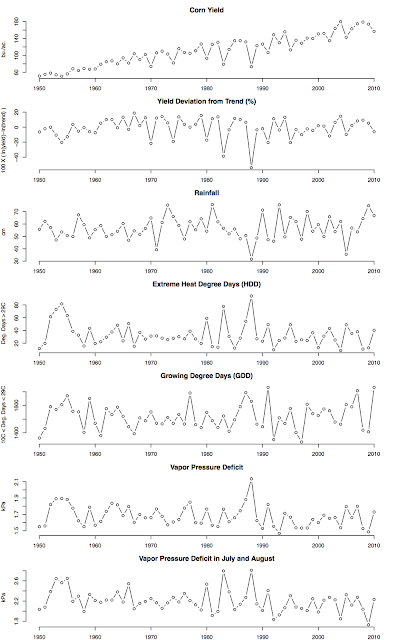 There are two interesting things about the VPD measure we construct. First, average VPD for July and August is closely associated with our best-fitting extreme heat measure, at least in Illinois.  Second, adding VPD for the season and VPD for July and August to our standard regression greatly improves prediction.  Using just five variables, these two plus growing degree days (degree days between 10C and 29C), extreme heat degree days (degree days above 29C) and precipitation, we can explain over 70 percent of the variance of Illinois yields, excluding the upward trend.  That's better than USDA's August and September forecasts, which are based on field-level samples and farmer interviews.  The model can explain almost half the difference between the August forecast and the final yield for Illinois.  Here's a picture of the fit: 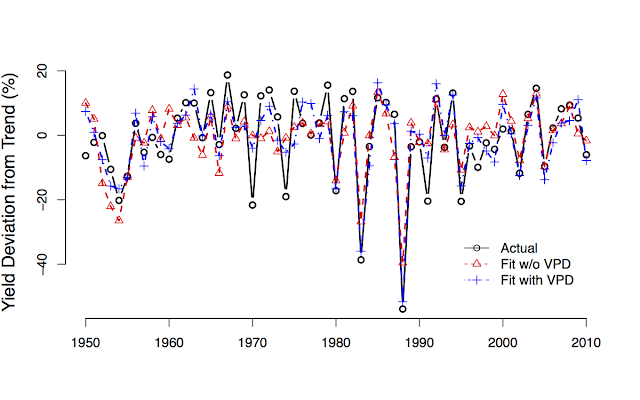 When we simulate these variables for future climates the outlook isn't much different from our earlier predictions: really bad.  But there is somewhat greater uncertainty around projected impacts, drawing mainly from interaction effects with precipitation after we account for VPD.  And since VPD, like extreme heat, is sensitive to the distribution of temperatures, things may not turn out as bad if warming occurs mostly in cooler months, or if lows increase more than maximums do.  Of course, if maximums increase more than minimums do, things could be a lot worse.   My sense from the climate scientists is that there is a lot more uncertainty about these more subtle features of climate change.

Also, these statistical models cannot realistically account CO2 effects, because CO2 has increased slowly over time and so cannot be separated from technological change.  At this point, CO2 effects for corn (a so-called C4 crop) are expected to be modest, but may aid heat tolerance.

I mainly see this work as another small step toward bridging deterministic crop models and statistical models.  A better ability to predict yields with weather should also aid estimation of economic phenomenon, since year-to-year weather variation is nice exogenous variable that can serve as an instrument in supply and demand estimation.  There may also be crop insurance applications.