On the Fallacy of Speculation-Driven Commodity Price Spikes

October 14, 2011
Update:  Mark Thoma has also has nice piece linking to the new report by the Federal Reserve.

Kay MacDonald over at Big Picture Agriculture has a nice post on the role of speculation in world commodity prices.

Kay is absolutely right:  commodity prices--both oil and food--appear to be overwhelmingly about fundamentals and not about excessive speculation.  Most economists I know and respect who study this stuff agree with Kay (and me) about this.   Bubbles may sometimes happen in some markets.  But I think bubbles are vanishingly rare in markets of consumable, non-durable commodities.

A lot of good people have tried to explain this and have offered evidence:  Jim Hamilton at UCSD, Scott Irwin at UI, Mark Thoma at UO, Paul Krugman, and many others, not to mention yours truly.  Just consider for a moment that, when prices spike, people are still buying and consuming most of this stuff.  Inventories only account for a small fraction of one year's production.

Also, during the vast majority of the times when prices spike, inventories decline.  It's impossible to have a bubble with declining inventories.  Now, it could make sense for both prices and inventories to spike at the same time. That can happen if people anticipate an imminent spike in demand or an imminent decline in supply (e.g., a possible oil export embargo).  While this situation might be hard to distinguish from a bubble, I think in most historical examples the evidence suggests that such expectations were reasonable when they happened.

Below is a graph Nam Tran, one my graduate students, recently put together recently for food.  It shows inventories and the caloric-weighted average price of corn, soybeans, wheat and rice, the four biggest food crops in the world that comprise roughly 75 percent of the caloric base.   Note that production is growing rapidly over time, so that, relative to the size of the market, inventories (storage) have actually declined markedly since the mid 1980s.  It seems pretty clear to me that prices are first and foremost a function of inventories.
﻿﻿ 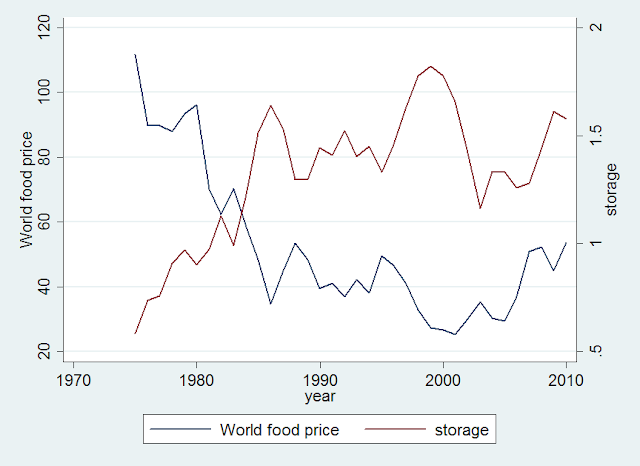 Update:   Here is a plot for a follower who does not agree with my characterization of inventories of oil.  It shows US inventories less the strategic petroleum reserve and oil prices.  Inventories were stable to declining when oil prices spiked.  When the financial crisis hit in October 2008, growth prospects fell through the floor immediately, and then inventories started to grow.  This looks like textbook commodity prices to my eyes. The data can be downloaded from the Energy Information Administration (http://www.eia.gov/). 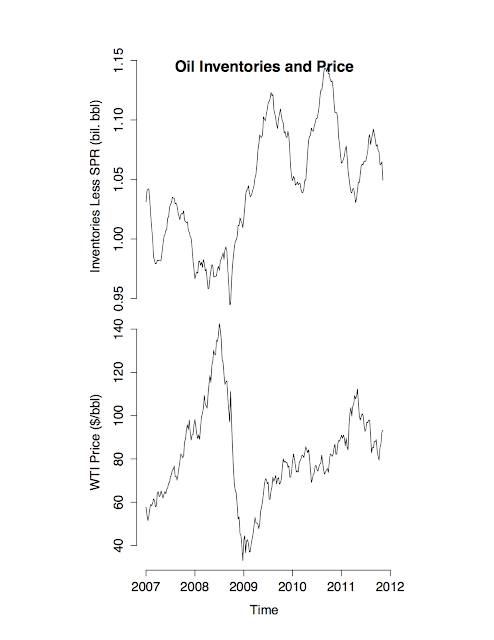