Krugman Is So Right And The Austerians Are So Wrong


The Critics Of Modern Macro Are Wrong

It’s even worse than they think.

John Kay has a rant that I largely agree with. Yet he says this:


The debate on austerity versus stimulus, in academic circles, is in large part a debate about the validity of a property called Ricardian equivalence, which is observed in this type of model. If government engages in fiscal stimulus by spending more or by reducing taxes, people will realise that such a policy means higher taxes or lower spending in future. Even if they seem to be better off today, they will be poorer in future, and by a similar amount. Anticipating this, they will cut back and government spending will crowd out private spending. Fiscal policy is therefore ineffective as a means of responding to economic dislocation.

and proceeds to talk about the unrealism of Ricardian equivalence.

But the fact is that even if you believe in Ricardian equivalence, it doesn’t tell you that fiscal policy won’t work. Let me post this yet again:

It’s one thing to have an argument about whether consumers are perfectly rational and have perfect access to the capital markets; it’s another to have the big advocates of all that perfection not understand the implications of their own model.

Sigh...  I fear a lot of PhD economists don't understand this stuff.

Another way to say the same thing--I think--is that the government can stimulate the economy by taxing and spending the same amount (preferably on useful things).  We can therefore stimulate the economy without changing the deficit and so Ricardian equivalence is beside the point.  This is because the government is spending the full marginal dollar and individuals' marginal propensity to consume will be less than one, and this is surely true even under Ricardian equivalence.  Because the wealthy have a low MPC, this stimulative effect would likely be largest if the taxes were on the relatively wealthy.

This is exactly what Robert Shiller advocates:

(Ack...  Here's the link.   I removed the embedded video because it played automatically).

Shiller is right for the same reason Krugman is right. But with 10 year T-bill rates hovering a little over 2 percent it seems to me stimulus would work out even better without off-setting tax increases (for the time being).

Balancing the budget in the long run--which we will have to do--is mainly about controlling medicare costs. We'll probably need some more tax revenue as well, and perhaps even reform of the tax code to make it fairer and simpler. But all these issues are of minor importance relative restoring full employment and growth as soon as possible.

We're throwing away about a trillion dollars a year, $2.7 billion every day, or $1.9 million every minute, due to this Little Depression.  And that doesn't count the human toll of long-run unemployment. 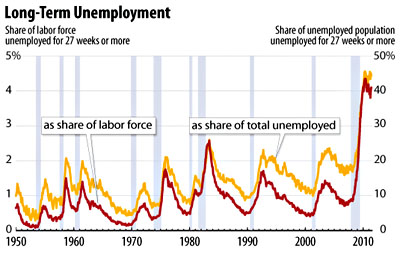 Update: Mark Thoma blogs about Robert Shiller's and his own similar proposal for making the most of our economic winter.

Update 2:  A commenter writes "Ricardian equivalence breaks down with distortionary taxation (capital tax, wage etc..) .... Any Macro-economist with half a brain knows that."

As I understand it, the idea of Ricardian equivalence applies regardless of how distortionary taxes may be.  It's an application of the permanent income hypothesis: If the government spends more without taxing more, tax payers will nonetheless adjust their spending plans immediately to account for the anticipated future tax.

There are lots of reasons Ricardian equivalence probably doesn't hold  (the next generation will pay the tax, credit constraints, simple lack of foresight, etc.).  But the point here is that, even if you have Ricardian equivalence, stimulus is still theoretically expansionary.  This is because the government spends everything in the short-run (that's what stimulus is) and the rational taxpayer smooths the burden over his or her entire life.

Now, juxtapose the commenter's apparent misunderstanding of Ricardian equivalence, the whole point of the post, the apparent admission that s/he is a macroeconomist, and "Any Macro-economist [sic] with half a brain knows that," and one can begin to appreciate Krugman's despondency:


The fact that these guys don’t even get the implications of their own models right tells us that the problem runs deeper than believing too much in abstract math. At some level it has to be political: they want to declare government policy ineffectual so badly that for all their vaunted modeling mojo they can’t be bothered to think it through, or listen to other people who point out their error.