Stocks are a Really Good Deal

I'm with Brad Delong.  The problem with David's analysis is that he's forgetting week one of econ 101: opportunity cost.  The opportunity cost of a dollar invested in the stock market is a dollar not invested in something else.  The benchmark alternative is a long-run treasury.  Brad points out that the rate on that is just dismal, less than today's dividend yield on stocks and far less than earnings.

David's mistake is a common one.  I see the same mistake when looking at home prices (the price to rent ratio relative to its historical average, not relative to interest rates or building costs).  It is important to take interest rates into account as well.

Brad Delong does it right by comparing the PE ratio to a proxy for the real (inflation-adjusted) interest rate.  Unfortunately it's a bit of work to develop a long history for long-term inflation-adjusted rates.  If we had that rate we could develop a decent pricing index for stocks by multiplying a long-term real interest rate by the usual PE ratio (say, Robert Shilller's version, with earnings taken as the average of the past 10 years).  When that index gets much above 1, stocks are probably a bad deal.  When the index gets well below 1, stocks should look like a good deal.

Since I don't have a long-term real interest rate, but I can easily download a long history of 10 year nominal rates from FRED, here I'll create a second-best pricing index equal to the nominal rate multiplied by Shiller's PE ratio (available here). What you get is the following index: 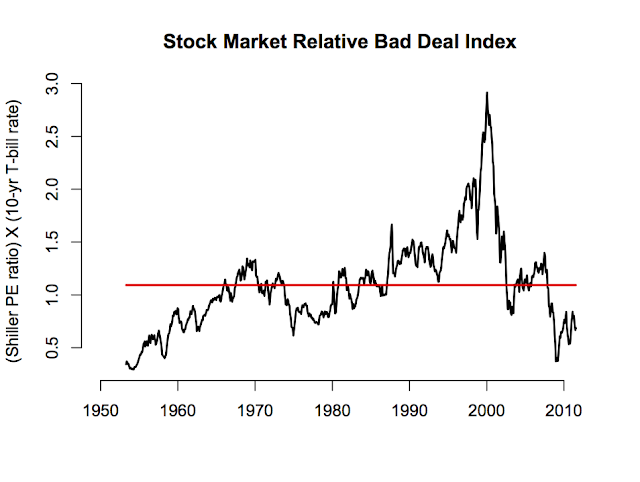 The red line is drawn at the historical average.  Note that this index ends in July, well before the recent crash. Also note that because I'm using a nominal rate rather than a real rate, stocks are probably a decent buy up to an index value that's a bit higher than one.

After yesterday's crash, which brought down interest rates and stock market prices, the index is probably close to 0.5.

Stocks look cheap to me.