December 29, 2010
This is a super simple plot of yields from the world's most successful crop: US corn.

Yields have been trending up in steady linear fashion for a long time.  The last five years are a continuation of that trend.

But consider:  Prices were at an all time low, in real terms around 2005-2006, trading at less than $2 bushel, and they have been above $4/bushel most of the time since late 2007.  That's a solid doubling or more of prices for a sustained period of time.

Now, if yields respond a lot to prices, shouldn't we see some kind of acceleration in the trend?  After all, prices were pretty much falling through most of the period from 1980 to 2005, and since then have increased substantially.

Like I said the other day, I sure don't "see" a big price effect on yields.  Do you? 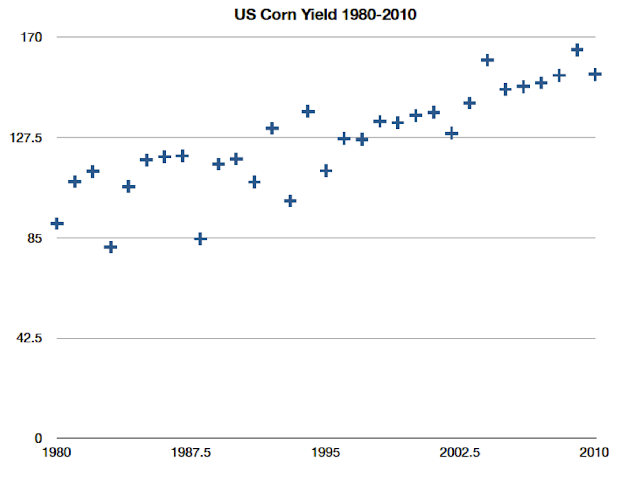 There's a lot more data where this came from at www.nass.usda.gov

Note that I usually don't believe "statistical significance" that cannot be seen with a compelling graphical presentation of the data.

Oh, and fertilizer was pretty cheap last year, too.

Update: Sorry, I've been out of commission for awhile and not checking the ol' blog.  I concur with James Giese's points about fertilizer use and the trend in yields.  I've played around with these data a lot, most of it unpublished. That experience tells me that one cannot reject the null hypothesis that yields are a trend from breeding and genetic improvement plus random weather variations.

The "right" amount of fertilizer is key, and too much can sometimes be a bad thing, not just for the water, but also for yields.

One side point: From an economic perspective, it is often optimal for farmers to"over" apply fertilizer vis-a-vis the agronomic maximum.  This is basically a gamble that the weather will turn out in such a way to make use of that extra fertilizer, even though it often won't.  From the vantage point of farmers' profits, the economic downside of applying too much agronomically is small compared to the extra profits if the weather is such that the extra fertilizer is actually needed by the plant.  This is an important point made by Babcock and others way back in the 80s I think.  This has nothing to do with "risk aversion" as sometimes described in the literature, but rather the option value associated with the possible high marginal productivity of fertilizer.   Now, given all the literature on "too much" fertilizer use, we should be pretty skeptical about a big fertilizer-induced yield response to price.

The anonymous commenter--who suggests that land expansion may be driving down average yield when prices go up--may have a point.  This is something we are exploring.  I'll just say for now that this kind of effect, though long hypothesized, is very hard to see in the data.  While there is a clear acreage response to price, it is a small one.  And especially for corn, that acreage margin isn't necessarily bad land.  It's mainly diversions from soybeans and cotton--pretty high value stuff.  So it's hard to see how this influences the aggregate yield very much.

Finally:  A graduate student has been trying to replicate Houck and Gallagher.  So far not so good:  He can't even get the same sign.  We're missing some of the early data, but using the more current data that are available, the same regressions say yields decline with price.  I think there are some tough statistical issues here that Houck, Gallagher, and the broader field have thus far neglected.  Nevertheless, I've seen enough to be extremely skeptical of earlier findings.