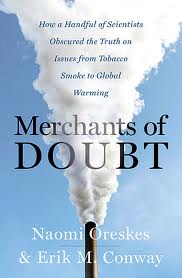 I haven't read the book Merchants of Doubt by Naomi Oreskes and Erik Conway, although this is something I've been meaning to do and intend to do very soon.  The book concerns the remarkable influence of a few very well organized scientists, backed by some powerful and deep-pocketed special interests, dedicated to sowing doubt in the public's mind about the reality of human induced climate change, that smoking causes cancer, and many other issues.  Way back I posted a talk by Oreskes with a similar theme.  Below is a very long but very good video of a lecture she gave more recently at the University of Rhode Island.  Don't miss the question and answer at the end.

The issue here is one that is larger than climate change itself.  It concerns the relationship between scientists and the general public, how people come to trust (or not) what scientists have to say, what "truth" is, and especially the role of media in communicating often disparate scientific findings to the general public.


The overarching challenge is that scientific findings can have powerful political consequences.  When this happens, scientific findings, no matter how persuasive, accepted, and settled within a scientific community, are going to receive significant push back from political interests, some perhaps even donning impressive scientific titles, as Oreskes has carefully documented.

Most scientists, however, are typically poor politicians and often poor communicators.  They simply don't see it as their job to wade into lengthy political battles.  Biology professors don't want to spend all their time explaining the theory and evidence of evolution on Fox News and being grilled and panned by Bill O'Reilly.  Perhaps they feel this is below them; more pointedly they likely view political debates as distractions from their serious work of finding better answers to real scientific questions.

The one thing the climate wars (and others) of the last 30 years have illustrated is that scientists cannot resign themselves to political apathy.  If they do, it is science itself, and broad progress of humankind that science has fostered, that will be the ultimate victim.

The last time I posted a talk by Oreskes I wrote:


Scientists may be tempted by the relentless goading of the denialists to get into to the media game but they really shouldn't.  The scientific community does not play this game well.  But the truth, whatever it is, gets out eventually.  It's important for scientists not to muck up that processes by stooping to denialist tactics.

My earlier view was naive.  While scholars should not attempt to mislead or misinform or push narrow ideological agendas, they do need to actively engage in spreading their research findings and implications to the broader public.  They do need to engage with media with and eye toward clear, transparent and positive communication.  They need to anticipate and take into account that political interests will often be aligned against them, and be prepared to cope with those attacks. They cannot simply sit back and wait for the real information to get out there one way or another.  They need to present the evidence themselves in the clearest and most transparent ways possible, and to broad audiences way beyond the journals.  We need biology professors with excellent communication and debating skills talking with Bill O'Reilly on Fox News about the theory of evolution.

Because, at the end of the day, everything is political.