How raising prices can reduce the cost of conservation

November 09, 2009
Many don't realize that the U.S. Department of Agriculture governs what is probably the world's largest conservation program: The Conservation Reserve Program (CRP).

It's a big deal by at least two measures:  (1) the amount of land, currently about 34 million acres (a little smaller than the size of North Carolina or a little more than 10% of U.S. cultivated cropland); and (2) government expenditures, which are about 1.8 billion a year last time I checked, which swamps any other direct expenditures for the environment that I know of.  It's not all that much less than the total value of SO2 permits, which is about 3.0 billion a year.

Some may say CRP isn't a conservation program, it's just another way to give money to farmers.  That  is probably part of it.  And part of it is to moderate total production and keep commodity prices higher for farmers not participating in CRP. But to me CRP looks a lot more like conservation program today than it did awhile back.

Acres enrolled were (mostly) planted with crops before they were enrolled in CRP.  Farmers receive annual rental payments from USDA (about $50/acre on average, but it varies widely) in exchange for retiring the cropland and instead planting native grasses, trees, legumes, buffer strips around water ways, and creating wildlife areas.

Like all USDA programs, this program has a lot of complex details.  But there is one detail that bothers me because I'm unsure whether folks at USDA, or even academic agricultural economists, generally understand how important it is.  In short, I think this program could save government expenditures AND buy more conservation services with a relatively small and seemingly innocuous change.

That change would be to INCREASE maximum rental rates in CRP general signups.

Let me explain.  General signups essentially work like an auction.  Offers of land get an environmental score than is combined with a cost score, which depends on how much rent farmers request.  The environmental component and the cost component are combined using a complex formula and all offers are ranked and selected from highest to lowest.

Here's the crux:  all rent requests are constrained by a maximum rental rate, and this rental rate is (supposedly) a guess for the market rent of the parcel.

The problem is that farmers will never submit offers if their true market value is greater than the guess (a crude appraisal of sorts).  This is true regardless of how low that market rate really is or how high the environmental score may be.  If the appraisals are unbiased then setting the maximum rate equal to the appraisal effectively throws out half the land the program is targeting, ultimately making the program much more costly for the government and less environmentally beneficial. 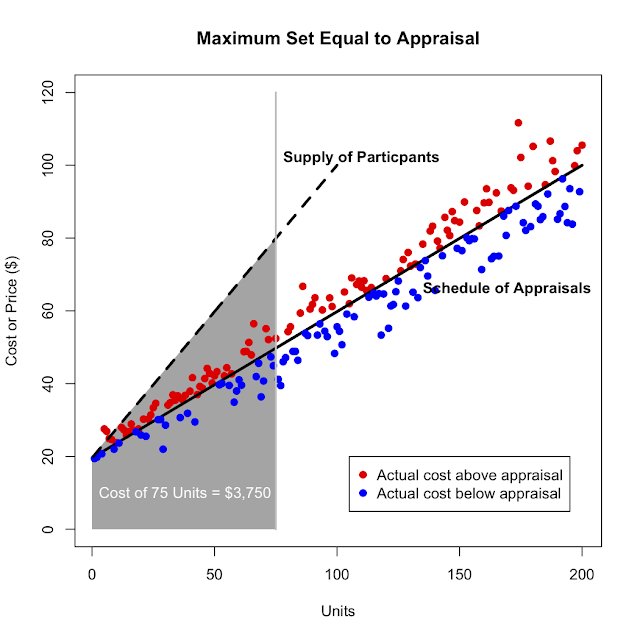 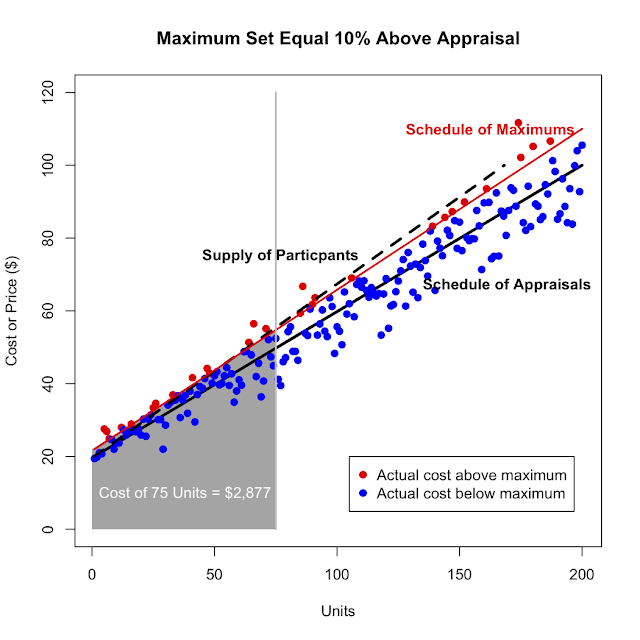 In the first graph maximums are set equal to the appraisals and this effectively excludes about half the potential land (the red dots) because the maximum is too low for these landowners to participate.  This causes the supply of participants to be about twice as steep as the supply of land.

In the second case, maximums are set about 10 above the appraisal, which attracts much more participation and makes the supply of participants flatter.  In this simple simulation, the total cost of buying 75 units goes down by about 25% in the second case as compared to the first.  If the goal is to buy the most conservation services for the least amount of money, the maximum rental rates should be a little higher in this simulation--about 15% above the appraisal.  And if appraisals are less accurate than I'm assuming here, the optimal maximums for cost effectiveness are higher still.

In general, the most cost-effective maximums depend on: (1) how steep the schedule of appraisals is; (2) how many units are being bought;  and (3) the accuracy of the appraisals.

Maybe everyone in the agricultural world understands all of this and there is good reason for the way things are done now.  But it's hard for me to see what objective is achieved by setting maximum rental rates equal to the appraisal values.

Update: Below, in the comments to the last post, Claudia asks about how appraisals are made and whether they are really unbiased.  The answers are, it's complicated and probably not.  I'll hopefully write what I know about appraisals some other time.  But the jist is that in some areas appraisals are probably biased too high and other too low.  But there is talk of changing appraisals so that they would be tied more closely to surveys of actual leases.  These would probably be unbiased, which sounds like a good thing on the surface but has me worried about unintended consequences, hence this post.