January 19, 2011
The other day I wrote that even blind optimism doesn't imply declining resource prices.  Let me try to flesh that idea out a little.

A key idea in natural resource economics, called Hotelling's rule, says that non-renewable resource prices (oil, natural gas, coal, etc) should rise at about the rate of interest. The basic idea is that natural resources held in the ground and not sold need to earn a fair return, just like any other asset.

That hasn't happened.  The long-run trend has been flat or downward (the last few years exempted).

Most economists have argued that the reason prices haven't increased is because extraction costs have declined.  There have also been some complicated stories about depletion effects on extraction costs.  These cost-related factors are very important for individual extracting firms, and may explain falling prices for a little while.  But costs cannot really reconcile broad resource price trends with Hotelling's rule, which actually holds up pretty well, even with complex cost functions and rapid technological change (see this paper for technical detail of this important yet obscure and often overlooked point).

In my rapidly aging (and unpublished) dissertation, I argued that a key reason prices haven't trended up is because prices have covaried negatively with the stock market and the aggregate economy.  Here are two illustrations of this phenomenon from this (also obscure) article of mine with Peter Berck: the long-run relationships oil price changes and coal price changes with returns of the S&P 500, both adjusted for inflation. 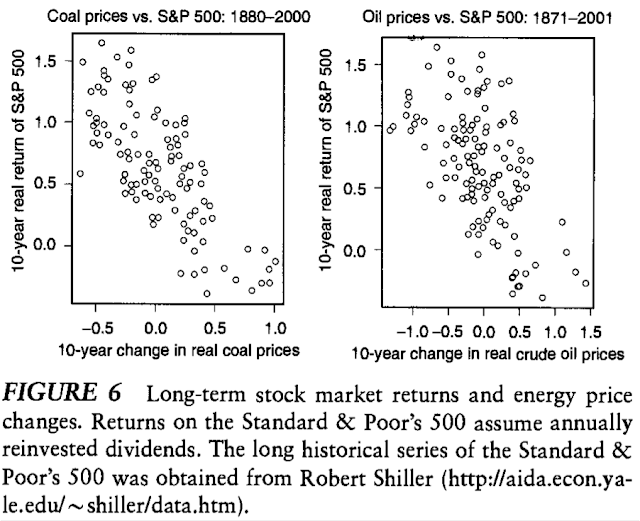 This suggests holding oil is a negative beta asset.  Negative beta assets are quite unusual.  Such assets are more like insurance than stock market bets, because they pay off most in bad times rather than good times.  This means they have negative risk premiums, not a positive one like stocks.  With a modestly negative adjustment for risk, Hotelling's interest rate may have been zero.

If that's been the case, it's an easy way reconcile the historical trend (or lack thereof) with the basic theory.  But it's also quite possible that non-renewable resources are no longer negative beta assets.  Today it seems commodity prices are moving up as the stock market and world economy move up. Prices are rising most in response to unexpectedly high growth, especially in Asia.  This is a sharp contrast to past price shocks that have been driven by supply shocks or fear of impending shocks.

If natural resources are now positive-beta assets, like stocks, Hotelling's rule predicts prices will start trending up, perhaps more then ever before.  But that's not a prediction of impending doom, at least not for the developed world.  It just means there's more uncertainty about aggregate growth than there is about natural resource supply.

I do worry, however, about rising food prices.  Not that this will much affect world GDP growth or the lives and livelihoods of most in the developed world--we'll hardly notice.  Really.  But the poorest third of the world, especially those living in urban places, cannot be happy at all about today's corn, soybean, wheat and rice prices....  But that's a different story.