Extreme heat is still bad for corn and soybeans


Corn futures rose the most in almost two weeks and soybeans gained on speculation that the recent Midwest heat wave will mean smaller production than the record crops predicted today by the government.

August has gotten off to the second-warmest start since 1960, T-Storm Weather LLC said today in a report. Another forecaster, Commodity Weather Group LLC, said about 25 percent of the U.S. soybean-growing area won’t get enough rain for proper plant development over the next two weeks, and that the dryness could harm a third of the Midwest should rain miss sections of Illinois this weekend, as expected.

“The crops are going downhill rapidly in parts of the Midwest and South,” said Mark Schultz, the chief analyst for Northstar Commodity Investment Co. in Minneapolis. “Our farmers are already preparing for corn yields that may fall 5 percent to as much as 10 percent from earlier field samples.”

Update: Current temperatures.  They are still rising fast.  If this keeps up for a few more days I'd say yields will get hammered. 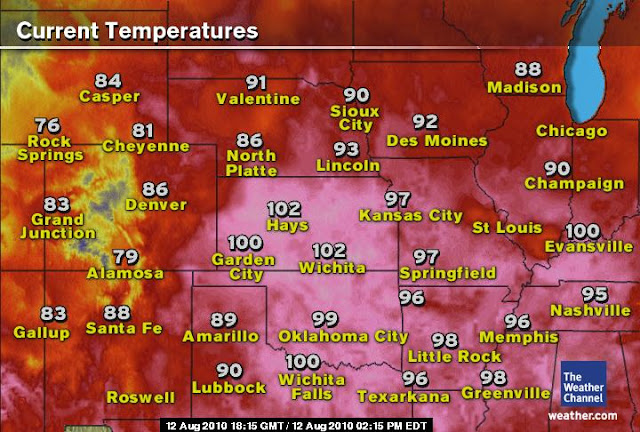