January 02, 2010
But I think he takes his contrarianism too far.


That's the right way to look at it.

But then he goes on:


But that is not how most real people invest. They don’t pour everything they have into just one type of asset and then add nothing to it for 10 years. Instead, they buy stocks of all sorts, and bonds and perhaps other things, too. And many millions of them dutifully add more money regularly, usually into a retirement account that they won’t touch for longer than a decade.


For those people, it was not a lost decade at all. Even those who started with a low six-figure balance could have doubled their total savings in the last 10 years.

No, this isn't a 2nd-grade math class, it's the "Your Money" column at the New York Times. 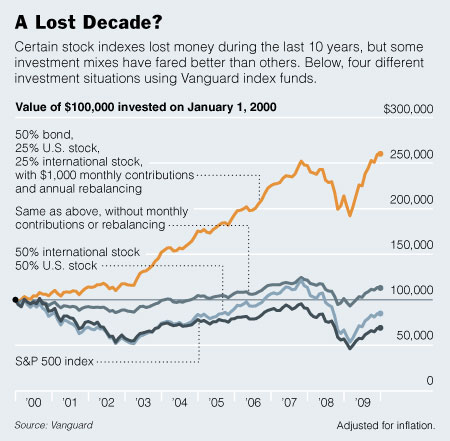 What is not made explicit is that most of the gain in the yellow line is just added savings.

If Lieber really wanted to show the benefits of diversifying through staggered purchases and re-balancing each year, then he should have plotted rates of return, not total balances.  I find the way he's presented it misleading.

Yes, bonds did better than stocks this decade, partly because interest rates fell and bond prices move oppositely from interest rates.  It would have been really nice if he at least showed the returns to bonds separately, because besides the adding of investment dollars, the biggest thing that separates the different lines is the fact that bonds did a lot better than stocks, a truly rare event.

The gains from diversifying purchases over time is, like the return to balance portfolio, almost naught this decade.  That is also kind of unusual.  But then Lieber doesn't really tell us that, does he?  In fact, he kind of implies the opposite.

To steal a line from Brad Delong: Why can't we have a better press corps?