June 05, 2009
Last weekend at the NBER meeting Climate Change: Past and Present, my coauthor Wolfram Schlenker presented some of our new research on the evolution of heat tolerance in corn plants.

First some background: In earlier research we found that corn, soybeans, and cotton yields all have a similar characteristic relationship with temperature: yields increase with temperature up to a critical threshold and then decline sharply. The critical temperature for corn and soybeans is about 29 degrees Celsius (84 F). This one variable [degree days above 29 C] explains about 70 percent of the typical surprise in corn yields each year--about as good as the USDA's August forecast. And the relationship is negative: the more extreme heat, the lower is yield.

To correctly identify this relationship we had to do careful analysis of weather data to obtain the time at each degree within each day and across days of the growing season. We also had to account for variations in temperatures between weather stations. Some of this work is reported in this working paper and a more recent version was recently resubmitted to a science journal. Hopefully it will be published soon.

In this earlier work we found tolerance to extreme heat was remarkably stable over time, space, and a zillion alternative specifications. But we only looked at data back to 1950. Largely motivated by Richard Sutch's research[1, 2], we decided to look back further in time the interesting period during the Great Depression when the Midwest experienced the harshest and hottest temperatures on record and farmers began adopting modern farming techniques, including hybrid seed and comerical fertilizers. The challenge was to find good enough weather data for that period. NOAA has detailed daily weather data going back to the late 1800s, but its pretty thin before 1950. It turns out Indiana is the first state reporting more than a very few weather stations. Since Indiana is a key corn growing state, that's where we focused our analysis.

Fairly consistent with Sutch's work, we found heat tolerance of corn plants grew markedly with the adoption of hybrid corn, between 1940 and 1960. But after 1960, around the time farmers started planting single-cross rather than double-cross hybrid corn, heat tolerance declined sharply. Today, corn appears more sensitive to extreme heat than it was before the Great Depression (albeit, with much higher average yields).

So what are the prospects for climate change? Well, there's bad news and good news. The bad news first, illustrated in the figure below. The figure shows our key temperature measure: degree days above 29C during the growing season. The big drought years (and bad yield years) show prominently: 1934 and 1936, the worst on record, and 1983 and 1988, the worst years in more recent history (aside from the 1994 flood). I've drawn a line in blue showing what is projected to be typical during the last 30 years of the century under the "nice" warming scenario--an increase of about 104 Degree days above 29C. This is the projection if we sharply curb CO2 emissions in the near term. Under this predicted increase a typical year will be worse that the worst dust bowl years of 1934 and 1936. A second scenario is "business as usual" in which there are no efforts to curb emissions--an increase of 330. I can't draw a line for that scenario because it's off the chart. WAY off the chart. And this projection doesn't account for the recent acceleration of CO2 emissions from China[1, 2, 3].

Note that these projections are from the Hadley III model--the model used in the lastest IPCC report. They are probably good guesses but are surely very uncertain. 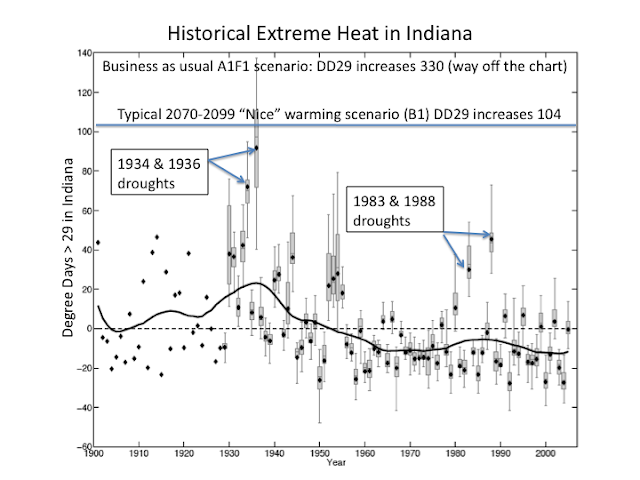 (click figure for higher-resolution. The diamonds indicate the state average for the growing season; the box plots indicate variations across counties within each year.)

The good news? Well, it looks like the damaging effect of extreme heat was curbed for awhile, so maybe they can do that again. The question is whether heat-resistant varieties can yield as much as the more heat sensitive varieties, since, over the last 20 years anyway, it seems they've only been able to grow yields by making them more sensitive to less-than-ideal conditions. And we'll probably need a *lot* more heat tolerance. In any case, while there seems to be some hope, prospects for yields under climate change are, for the moment, uncertain at best.