A Real Limit to Farm Subsidies?

February 27, 2009
It looks like the Obama administration wants to put me out of business. Or at least force me to work more on research topics besides impacts of agricultural subsidies, which Obama wants to limit (hat tip to Tim Haab). I wouldn't complain about the change in research venue.

Here is the agriculture portion of the plan.

Here's CNN's coverage of the story:

On agriculture, wealthy farmers would get less money from the federal government -- and none, three years down the line -- under proposals in Obama's first budget.

Obama's proposed fiscal year 2010 budget "phases out direct payments over three years to farmers with sales revenue of more than $500,000 annually," according to the list.

At present, "direct payments are made to even large producers regardless of crop prices, losses or whether the land is still under production."

But according to the list, "Large farmers are well-positioned to replace those payments with alternative sources of income from emerging markets for environmental services, such as carbon sequestration, renewable energy production, and providing clean air, clean water, and wildlife habitat."

The new proposed budget cuts the Market Access Program which provides "funding for overseas brand promotion." It cuts cotton subsidies and "proposes to eliminate the requirement for the government to pay the storage costs of cotton that is put under loan by the USDA. Cotton is the only commodity for which this assistance is provided."

One problem. In the past, caps on payments have been easy for farmers to get around. For purposes of bookkeeping, they just break the farm into pieces. One piece is owned by Papa Farmer, one for Mama Farmer, another for Johnny Farmer, and perhaps another for cousin Jenny Farmer. Here is a research paper by Barrett Kirwin who finds tell-tale signs of this reorganizations. Most of the evidence in anecdotal. But this figure from Kirwan is a little more than anecdotal: 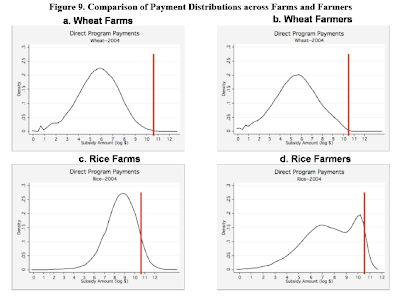 Farms and farmers aren't quite the same thing. Farmers recieve payment; farms may be comprised of multiple farmers and earlier payment caps were tied to farmers (see Kirwan for details). Payment caps were mostly non-binding for wheat farms and farmers and the payment distributions look very similar--a nice bell shape. Rice farmers get huge payments by comparison and so they reach the payment cap far more frequently. And here we see the distribution of payments to farmers looks quite unlike that for farms--it has two humps, not one. The second hump coincidentally aligns just before the payment cap.

Or, maybe that's not a coincidence. It's likely these are farms reorganized into more farmers so as to avoid payment limits.

Maybe the Obama administration could write the rules very carefully so that such a thing could be avoided. I'm no lawyer, but I imagine this would be very difficult. So payment caps may sound nice to some. But it's hard for me to believe this policy, if actually implemented, will have any real influence whatsoever.