How much has ethanol influenced commodity prices?

January 10, 2009
It's no news that commodity prices have been unusually variable over the last few years. Oil and gas prices have been most prominent in the press, because that's what has most affected people in this country.

In my little corner of academia it's been about agricultural commodities. Agricultural commodities have also been the big story in the poorer half of the world living on $2/day. They spend most of their money on food staples, like rice, wheat, corn, palm oil, and soybean oil. When these prices double or triple (or more) it's a pretty big deal. It makes our problems with gas price fluctuations seem trivial by comparison.

With the financial crisis and global recession bringing prices back down, the news has subsided. But before the price drop there were lots of prognostications about the underlying causes the boom in commodity prices. Four key reasons came out of the discussion:

I briefly summarized these factors here. In addition to these factors (and partly because of them) were export restrictions, particularly of rice in south Asia. These restrictions kept domestic prices lower in the countries that imposed them, but further increased world prices.

What's less clear are the relative magnitudes of these various factors.

In many ways, the first factor is most interesting, since growth in ethanol demand was driven mainly by U.S. policy: a 51 cent/gallon subsidy, a tariff on less expensive imports from Brazil, plus mandates establishing significant growth in production going forward. In the U.S., ethanol is made from corn, an important food staple (it feeds most livestock, among other things).

At the recent ASSA meetings in San Francisco, Wolfram Schlenker and I weighed in with our own analysis. Our view: we cannot get very far in ascribing relative magnitudes without having a clearer idea about the world supply and demand of food commodities. In our paper we estimate the supply and demand of calories produced from corn, soybeans, wheat, and rice combined, which comprise about 75% of the calories from which food is derived worldwide.

Adding it all up, U.S. corn-based ethanol uses a consumes more than 4% of world caloric production and will soon consume between 6 and 7%. Since markets are forward looking, we'll use 5% for our back-of the envelope calculations.

The figures below show the caloric breakdown by crop worldwide and the U.S. share of the total. The trend up is due mostly to technological advance--the "green revolution"--which has brought greater yields per acre. 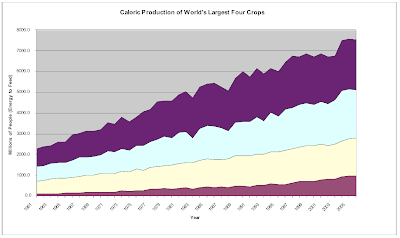 From bottom to top, the crops are soybeans, rice, corn, and wheat. 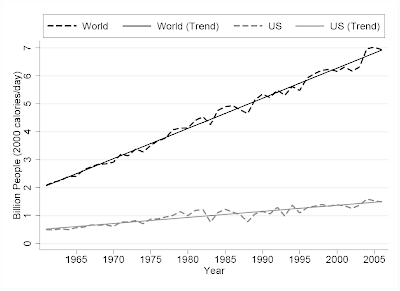 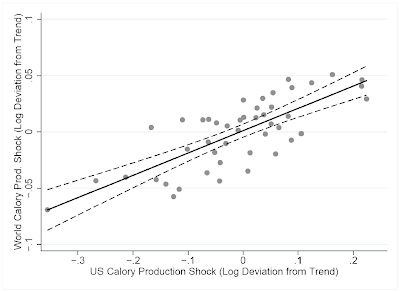 Now let's turn to supply and demand. The figure below provides some powerful clues. It shows the world caloric price (the calorie-weighted average across crops) together with world caloric production and consumption. Consumption is smoother than production because storage smooths out the fluctuations. Prices fluctuate negatively with production, which is indicative of supply shocks and price movement along a downward sloping demand curve. 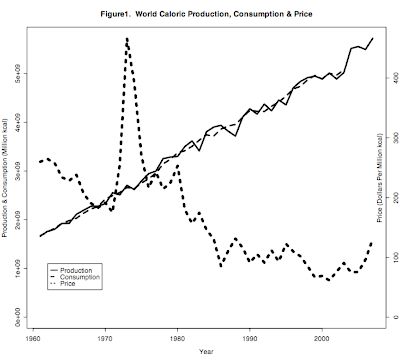 Here's the key thing to note: the size of the quantity fluctuations, especially consumption quantities, are quite small while price fluctuations are quite large. I see no way this can happen unless both supply and demand are extremely steep (inelastic).

We estimate the supply and demand elasticities using variations in weather, approximated by country and-crop specific yield shocks that are then aggregated to a worldwide shock. These fluctuations show an even stronger negative association with prices than the aggregate production variations shown in the graph above. The aggregate production fluctuations include expansion and contraction of land cultivated, not just weather. In other words, they include movement along both the supply curve and the demand curve.

The graph below shows our aggregated world weather-induced yield shock together with prices (in log terms). Note that the scale for shocks on the right (the shock is measured in proportion to trend production) is on a scale equal to 1/10 the scale on the right for log prices. This means small yield shocks have a big effects on prices, despite the fact the storage smooths yield shocks over multiple years. 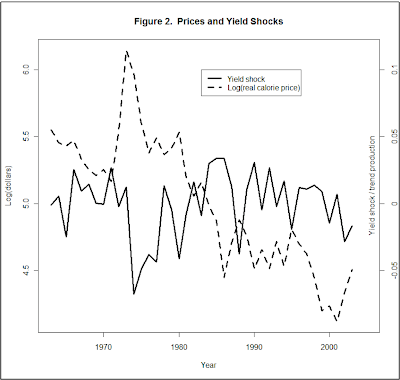 We estimate demand by measuring the relationship between consumption changes and price changes caused by weather-induced yield shocks. Since the quantity changes are very small and the price changes are big, we get an inelastic demand curve: quantity demanded goes down about 1% for a 25% increase in price.

We estimate supply by measuring the relationship between quantity produced and price changes caused by *past* weather shocks. Because of storage, which smooths shocks over several years, past weather shocks affect both current and future prices. In the current year, farmers can't respond to the higher prices by producing more, but they can respond in future years. The result: quantity supplied goes up about 1% for a 10% change in price.

The nice thing about using weather to identify these demand and supply relationships is its near randomness. It's about as close to an experiment as economists can hope to find in naturally occurring data.

So what do these elasticity estimates imply about the effect of ethanol on the prices of food commodity staples? The 5% shift in demand for calories caused about a 34% increase in the average price of calories derived from corn, soybeans, wheat and rice. Accounting for uncertainty puts the price increase in the range of about 22% to about 67%.