July 23, 2012
I'd like to think I helped inspire Krugman to write his column today, since he linked here the other day from his blog.  Hardly anyone reads this thing, but if the right people read it, maybe it can have some second-hand impact?  This and my slightly easing schedule inspires me to try getting back to it.

Hansen's climate dice paper shows how much the relative frequency of extremely warm temperatures has increased.  But how is it that scientists know warming is due to greenhouse gas concentrations (primarily CO2)?

Earlier this summer I got to attend a workshop in Banff on climate change detection and attribution, a research area dedicated to precisely this question.  Besides a few token impacts guys like myself, the workshop was attended mainly by top people in detection and attribution.  It was interesting for me to see the technical side of this, which basically involves some sophisticated statistical modelling.

The basic idea is to look at how the "fingerprint" of warming matches the core predictions of the various climate models.  This fingerprint includes much more than the amount of surface-temperature global warming.  They pay attention to the pattern of warming across different latitudes.  The climate models predict more surface warming in the polar regions and especially the north, as compared to equatorial regions. Most compelling to my mind, is the fingerprint of predicted warming and cooling in different layers of the atmosphere.   Unique to greenhouse gas emissions, the models actually predict cooling in the lower stratosphere, but more warming in the upper troposphere in equatorial latitudes.  I understand physicists predicted this distinct fingerprint before they had even begun measuring temperatures throughout the troposphere and stratosphere.

Here is a picture from Ben Santer's talk that illustrates the model-predicted pattern of warming from GHG in comparison to other factors that might cause warming. 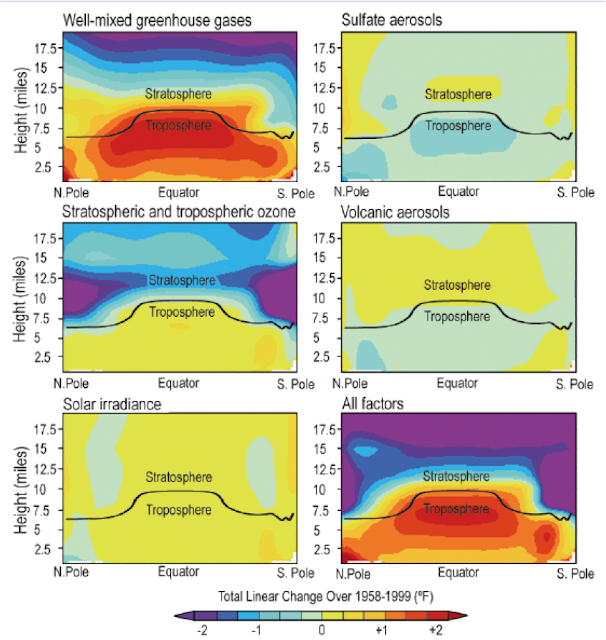 And here's what data on actual warming look like: 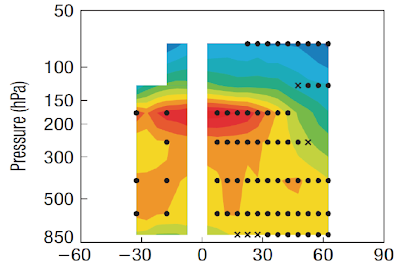 In a nutshell, this is why the real climate scientists--about 97% of them--are not only convinced that climate change is real, but that it is due to greenhouse gas emissions and is human induced.
(If you dig around the link to the workshop you can find a video of my talk on agricultural impacts....)