October 11, 2010
It wasn't just wheat that was way off earlier forecasts, but corn and soybeans too.

It's a bit early to know for sure, but I'm guessing that late-season heat wave did more damage than people thought.

The headline over at USDA was kind of interesting:


USDA Forecasts Record-High Soybean Crop
WASHINGTON, Oct. 8, 2010 – On the heels of a warm growing season, U.S. soybean production is forecast at a record-high level, according to the Crop Production report, released today by the U.S. Department of Agriculture’s National Agricultural Statistics Service (NASS).

Corn production is forecast at 12.7 billion bushels, down 3.4 percent from last year’s record. Based on Oct. 1 conditions, corn yield is expected to average 155.8 bushels per acre, down 8.9 bushels from 2009. If realized, this will be the third highest yield on record. Growers are expected to harvest 81.3 million acres, up 0.3 percent from the September forecast.

This is strange given the real news was that both soybean and corn forecasts were way down from their September numbers.  Another strange thing is how they emphasize "a warm growing season" in the first line.  Without a little bit of contextual knowledge one may draw an impression that the warm growing season was what drove production to its "record-high year."

For comparison, here is the press release from August:


WASHINGTON, Aug. 12, 2010 – U.S. farmers are on pace to produce the largest corn and soybean crops in history, according to the Crop Production report released today by the U.S. Department of Agriculture’s National Agricultural Statistics Service (NASS).

Corn production is forecast at 13.4 billion bushels and soybean production at 3.43 billion bushels, both up 2 percent from the previous records set in 2009. Based on conditions as of August 1, corn yields are expected to average a record-high 165 bushels per acre, up 0.3 bushel from last year’s previous record. Soybean yields are expected to equal last year’s record of 44 bushels per acre.

There was no official press release in September (post heat wave) when the corn yield was revised down just a little bit to 162.5.

For a little historical perspective, here are September, October, and November forecasts for corn yields since 1995: 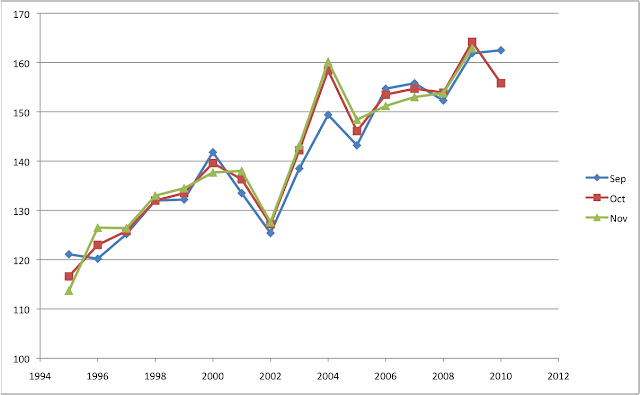 Typically there is very little if any revision between the November forecast and the final yield.

The first thing to note is that usually the September forecasts are very good.  This year and 2004 are the exceptions.  And, usually when forecasts are off by anything larger than a trivial amount, it's an upward correction, not a downward correction.

Another interesting thing to note is that the October forecast almost always sits between the September and November forecasts.  I think last year (2009) is the only exception.  That suggests the crop will actually turn out worse than the current forecast.

A grad student is busy updating our fine scale weather data now.  I'll look forward to looking at the final yield and weather data to see if anything interesting emerges.