Tracking the Heat and Drought

July 26, 2012
Most commentators attribute this year's bad crop progress with drought--a lack of rainfall.  The problem with traditional drought measures is that they don't predict crop outcomes especially well.  Our measure of extreme heat--degree days above 29C--predicts crop outcomes a lot better.

Extreme heat is correlated with traditional drought measures, but only very roughly.  But it probably has a stronger association with water stress in plants, since there tends to more evaporation and evapotransporation when it's very hot (vapor pressure deficit increases).  Also, heat can have its own direct damaging effects on plants.

So, here's the current situation for extreme heat and precipitation the US relative to history since 1960.  We obtain a single nationwide index by weighting counties by trend production.  County level measures are derived from our own daily fine-scale (4km grid) weather data, which combines PRISM monthly data with daily weather station data. 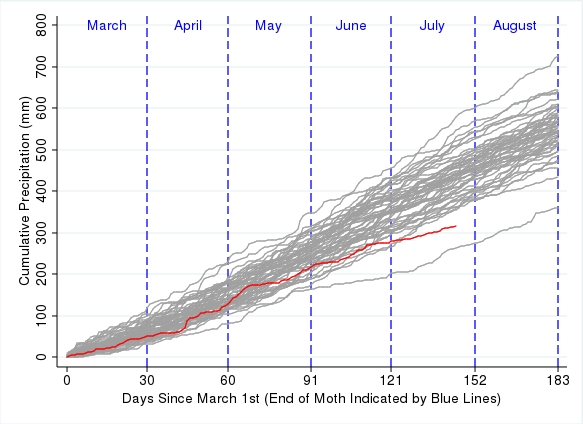 These plots were generated by my colleague Wolfram Schlenker.  We're also going to start cross-posting at our joint site G-FEED, a group that includes Wolfram as well as David Lobell, Solomon Hsiang and Jarrod Welch.

The gray lines show earlier years, the hottest prior to this year being 1988 and 1983, which had really bad crop outcomes.  The driest year was also 1988; but 1983 is one of the lines in the middle somewhere.

From the extreme heat measure, it looks like we're on track for the worst yield outcome (relative to trend) in over 50 years. Precipitation doesn't look quite as bad, but close.